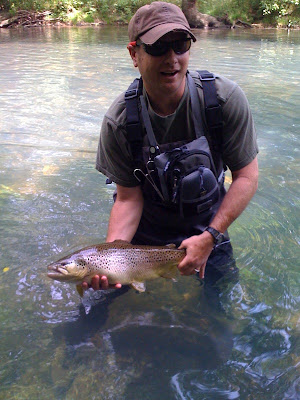 Brown trout (salmo trutta) are not native species to North America. The first documented introduction of brown trout was on April 11, 1884, J.F.Ellis stocked 4,900 brown trout fry(von Behr strain) into Michigan's Pere Marquette River. After this initial distribution in 1884, distribution of brown trout was swift and wide. The first North American introduction of Loch Leven trout, Salmo trutta levenensis (a lake form), appears to be made in Long Pond near Saint John's, Newfoundland, in 1884. The sea run strain (S. t. trutta) was also introduced around this time but, the only currently known strain exists in Nova Scotia and Massachusetts. After the first North American introduction of the Lock Leven trout occured in 1884, brown trout were introduced into every province except Prince Edward Island. Incredibly, there was little or no attempt to keep the Lock Leven and the von Behr strains isolated or distinct. Goverment and private fish distribution records listed both types, but widespread shipment from one hatchery to another (crossbreeding), and the introduction of both strains into the same waters apparently resulted in the merging of the original distinguishing characteristics.

The von Behr trout, (S. fario) lived in small streams, were brightly coloured, and rarely exceeded the lenght of 12 inches. In contrast, the Loch Leven trout, (S. levenensis), was a lake-dwelling form, silvery gray with black spots, reaching a size of 18 lbs. If, as reported, the von Behr and Loch Leven strains have been widely interbred and broadly distributed, and if the brown trout has a plastic genetic ability(polymorphic), I'm not surprised that North American brown trout are, in appearance and life history, similar to practically every form originally described in Europe.

One things for sure it was isn't sea run brown ! This Brown measured approximately 23 inches and estimated weight of 5 - 6 lbs. It was released unharmed.
at 10:35 PM